PLEASE NOTE THIS PRICING IS FOR A 3 MONTH HIRE PERIOD

While the M Series Computer is awake, the Backlight Sensor automatically detects ambient light levels in the room and turns on the backlit display when needed.

The M Series Computer is a powerful teaching and 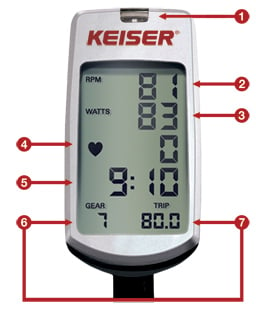 programming tool. It can assist both the instructor and the participant by providing immediate feedback as well as the ability to track on-going improvement. The computer can be used as a motivating tool to engage participants in their workouts, as the more participants understand the components of a proper workout, the further they can fine tune their performance.

The M Series Computer gives accurate and precise information instantly, and automatically. It will also display average ride calculations and total distance that has been put on the machine. The Trip Distance feature was initially intended to be used by gyms and facilities to record how much an M3 was used for a given time frame. The odometer does not reflect distance in terms of miles or kilometers, rather something in between. For every 200 turns of the crank arm the distance will reflect as 1.0 on the display. In the future, we may revise the computer’s algorithm to display a more recognizable distance, which will also be influenced by a rider’s pedaling effort or Power.

KEISER IS TAKING INDOOR CYCLING TO THE NEXT LEVEL

With the free Keiser M Series app, indoor group cucling riders can easily track and log every detail of their rides on Keiser M3i bikes to see their progress.

With the free Keiser M Series group app, indoor group cycling class instructors can ignite competition to inspire riders and keep them coming back for more.

Instructors can view all the Keiser M3i indoor bikes in a group cycling class in a single list, with options to sort and view live data.

Instructors can view all the Keiser M3i indoor bikes in a group cycling class in a single list, with options to sort and view live data. 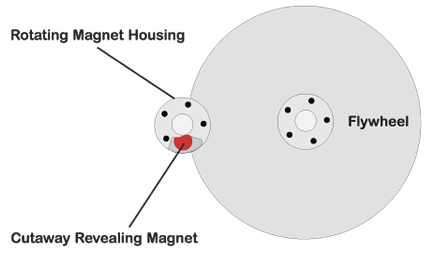 An eddy current is an electric current in a conducting material that results from induction by a moving or varying magnetic field. On M Series equipment this is generated by two opposing magnets passing over the flywheel. The flywheel (a conductor) passes through the magnetic field generated by the two powerful magnets. By varying how much of the flywheel comes into contact with the magnetic field you can increase or decrease the amount of resistance for the rider. As no parts in the resistance system ever touch there is no wear on the system.

Fig. 1. At full resistance the flywheel is in most contact with the magnetic field. When you reduce the amount of contact to the field (move the magnets away) the resistance then decrease

With our game-changing bike pedal, Keiser has again revolutionized indoor cycling down to the last detail. New pedal features include:

Added to your cart: